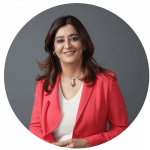 Nooraine is an educationist, sportsperson, entrepreneur and change maker who believes that quality education can empower youth to bring about positive change in India and the world. She conceived, conceptualized and made possible Inventure Academy, now ranked one of India’s Top 3 schools. Nooraine’s vision for education promises robust, lifelong development of the individual. She strongly believes that individuality is to be celebrated; everyone is capable of being a lifelong learner; and everyone has the potential to achieve their life’s ambition, while contributing to making the world a better place. These beliefs directly translate into the Core Values at Inventure Academy.

Actively involved in every aspect of the school, from shaping its culture, programs, systems, policies and its learning environment, Nooraine is still accessible to learners, teachers and parents. At Inventure, she has owned / co-designed & implemented a number of innovative educational programmes: Our Voice, Change Maker, Youth Parliament, and in-house school musical productions, teaching learners life skills, and creating a cadre of positive change makers & innovators.

Outside school too, Nooraine has taken the lead on several impactful campaigns and initiatives. She has developed and implemented a PPP model in government schools, working with NGOs and aimed at enhancing academic & beyond academic learning outcomes, and teaching entrepreneurship skills. She is a Core Committee member of B.PAC, a citizen’s movement in Bangalore, and has worked on its brand identity. She has supported the cause of democracy by coordinating two unique programs: Vote for Bangalore and March for Bangalore which led to a 12% increase in voter turnout for the Assembly elections in Karnataka state in 2014. She has actively participated in the India Against Corruption and Corruption Saaku movements, too. She is an Independent Director at Cigniti, a public listed Software Testing Company in India. She has played both for the Karnataka women’s cricket and basketball teams, and is also an avid golfer.

Nooraine has been invited to speak at the University of Pennsylvania (on starting a school using design thinking) and the National Law School, Bangalore (twice, including on the impact of fee fixation on schools); she has been on panels at various events/conferences/summits including Fortune Magazine, World Leading Schools Association (WLSA), Didactics Society; and has been a speaker at various forums on the National Education Policy.

Nooraine Fazal has a Master of Science degree in Management from Boston University. She worked with IBM and Reuters for 10 years in a front-line and managerial capacity. She returned to India in 2003 (after twelve years across the UK, USA, Middle East, Australia and Greater China region), in order to be a ‘citizen with a say’ in the way the country is developing.

Her aspiration is to impact positive change at scale by empowering youth with the right kind of education aimed at building a progressive, secular and inclusive society. Meenakshi Myer, Principal of Inventure Academy since 2018, is an educator with vast experience both in national and international education. Armed with a Master’s Degree from Delhi University and a B.Ed, her experience in the field of education spans twenty-five years of teaching, including six years of administration. Additionally, she has two years of experience in Teacher Training which she considers the most vital part of her career. From 2016-2018 she was Head of School (Middle and Senior). Formerly, she was Head of IB DP at Indus International School, Bangalore. Meenakshi believes that education should create open minded, sensitized lifelong learners, who are prepared to face the challenges of life in the 21st century with confidence and resilience. She is a driving force in the school and is passionate about working collaboratively with learners, teachers and parents as equal partners in the field of education, and endeavours to make learning a truly meaningful and happy experience for learners. 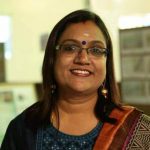 Meenakshi Elangovan is a passionate educator with 20+ years of teaching experience. She has a Masters degrees in Geography & Public Administration and an Advanced Diploma in Professional Practice and Design in Education. In addition, she holds a CAIE Diploma in Teaching & Training and is a CAIE accredited trainer.
At Inventure Academy, she has worked across a variety of roles – Geography teacher, department head of Social Studies, Coordinator for the Cambridge & CISCE board exams and leading Inventure’s professional development efforts. In the Academic Year 2021-2022, she took on the role of Head of Middle & Senior School & Head- Professional Development.
Meenakshi is deeply passionate about equipping teachers with progressive pedagogy and skill sets so learners have meaningful learning experiences. Her focus is to enable Inventure to be a learning organization where teachers and learners are excited by learning and take ownership for their own development. With a B.Com., B.A. and currently pursuing a B.ED, Preet currently heads the Kindergarten & Primary sections at Inventure Academy. She is a Founding Team member, and her current role is, she says, probably the most challenging thus far, since it involves being a learner as well as a teacher. She says “the ultimate satisfaction is being able to impact young lives positively with love and learning.” She has over 25 years of experience in the wider field of education – career counselling school learners, working with the Times of India’s Newspaper in Education (NIE) program, plus five years in the field of diagnostic educational testing, promoting the International Assessments for Schools from the Educational Testing Centre, UNSW Australia, and the ASSET test. Varsha, also a Founding Team member, has a Masters in Business Administration, and over 20 years of experience in finance & administration. Varsha started her career as a manager with The Dalal Street journal, then worked at the ITC Travel House and Rosenbluth International. Her areas of responsibility at Inventure Academy are multiple, ranging from HR, finance & accounting to taxation, administrative, legal and procurement functions of the School. 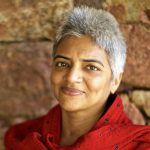 Head – Centre of Excellence
Dr. Sowmya Narayanan an educator with Inventure Academy for over 10 years is passionate about creating lasting learning experiences for students. She has a Ph.D. in English Literature from Bangalore University and has worked at Inventure Academy as an English teacher, Head of the English Department, Centre of Excellence for Languages, and is now the Head of the Centre of Excellence. Dr. Narayanan focuses on pedagogical approaches and key initiatives that align with Inventure’s philosophy of providing holistic education and works towards continuously upgrading the Inventure curriculum by reviewing and adopting the best practices from around the world. She is committed to reimagining education to equip children with lifelong skills and also empowering teachers to change their practice to suit the needs of an ever-changing world. She is a NEASC visitor and has been part of accreditation visits in India and Asia together with being an avid reader who is passionate about wildlife and travel.
Scroll to top